If this were animated, it’d be voiced by…

Kurosawa – The obvious choice is Fukuyama Jun (for some reason Kira Mamoru just doesn’t sound right here), but maybe there’s a more interesting choice?
Takagawa – Horie Yui. This choice is kind of cliche genki girl with bad past, a sort of lesser Minorin. Another choice is Katou Emiri. うふふふふふ
Kitahara – Takaba Ai (would be interested in her sadistic voice). I was thinking maybe Mizuki Nana…just because…but I’ve never heard Nana’s quiet yet slightly higher voice (compared to Fate and Touma): this makes me want to listen to Itazura na Kiss.
Nagaoka – Shiraishi Minoru (the other obvious choice is Yoshino Hiroyuki, who does good at the random friend). Shiraishi’s kind of husky voice I think would suit his inner afro.
Suguwa – An obvious choice is Yukino Satsuki, but I was thinking even maybe Hirano Aya would work here. Michiko Neya, would be nice too.
Kurosawa no imouto – kyonkundenwa?

rideback: not as keikaku

okaeri: mediocre save for a few parts

index: misaka was awesome but meh

white albumb: I AM SOOOOOOOO CONFUSED

xam’d: I AM SOOOOOOOO CONFUSED BUT IN A GOOD WAY.

When I was stalking lolipower for White Album downloads, I came across this picture. At first it would appear a typical anime art, but we should take care to notice the gender roles.

Boobs. We can see them on the person on the left. There are a few more visual clues: blushing, the red head thingy, the partially opened mouth. But most importantly, her position vis-à-vis the other person, she is “on bottom”, or, rather, the person in blue is holding her.

But because the two characters are virtually undistinguishable based on non-contextual appearance alone (the “guy” is very androgynous), this just shows how socially constructed signs and clues can engender gender (sorry, had to say it) moreso than, well, the site of gender itself, anatomy and people.

Here is my photoshopped version: 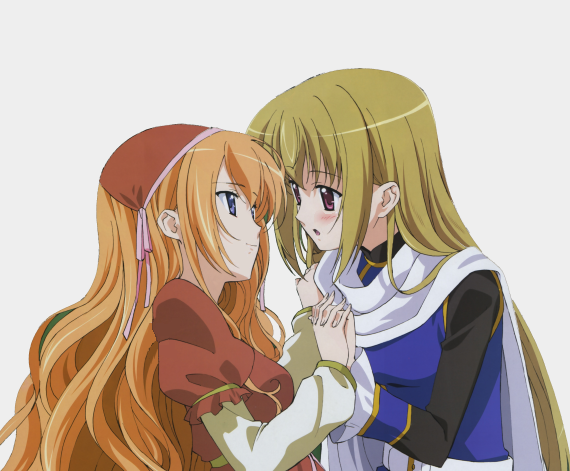 What I did: removed the hand on the red blouse, switched oral expressions, [terribly] added blushing to person on right, removed ahoge.

Does it look more yuri? I dunno, probably not. But you get the idea.

←[106] After many delays, digiboy and I finally discuss GAR.

END_OF_DOCUMENT_TOKEN_TO_BE_REPLACED

coburn established that perfection is an ideology.

I realized that subjectivity and conflict between subjectivities is essential to society.

A month ago, OGT told me up:

I still must disagree with Lelangir, though-even in my relative infancy as a LoGH watcher, even with the quality of storytelling in LoGH at a ridiculously high level, it still shouldn’t “kill” anime, metaphorically or no. There’s far too many diverse kinds of anime for it to “kill” anime, and (according to this post, anyway) stating such seems to imply a rejection, or trivialization, of anime and its web of trappings, which does nasty things to my head as I try to wrestle with a fanbase who trivializes their own object of fanhood. [my emphasis]

I don’t remember if I was being hyperbolic (afterglow of fanboyism probably) by saying that LoGH killed anime – I do know that it was the most captivating thing I had ever watched though. But OGT is absolutely correct by saying that when we state we have witnessed perfection, this elusive ideology that is not really supposed to concretely exist, we are effectively trivializing the object of our fandom, of our social existence, by enacting a supposedly objective hierarchy of value – LoGH would be perfect, everything else, not perfect. Obviously, in many ways, it doesn’t work like that.

So I was asking myself – why do we rate in the first place? I have no idea. But I have questions:

(2) We need standardization, systems of agreement. Concrete ways to convey opinion through the same system [of ratings]. Simultaneously, this leads to disagreement, but that’s a good thing.